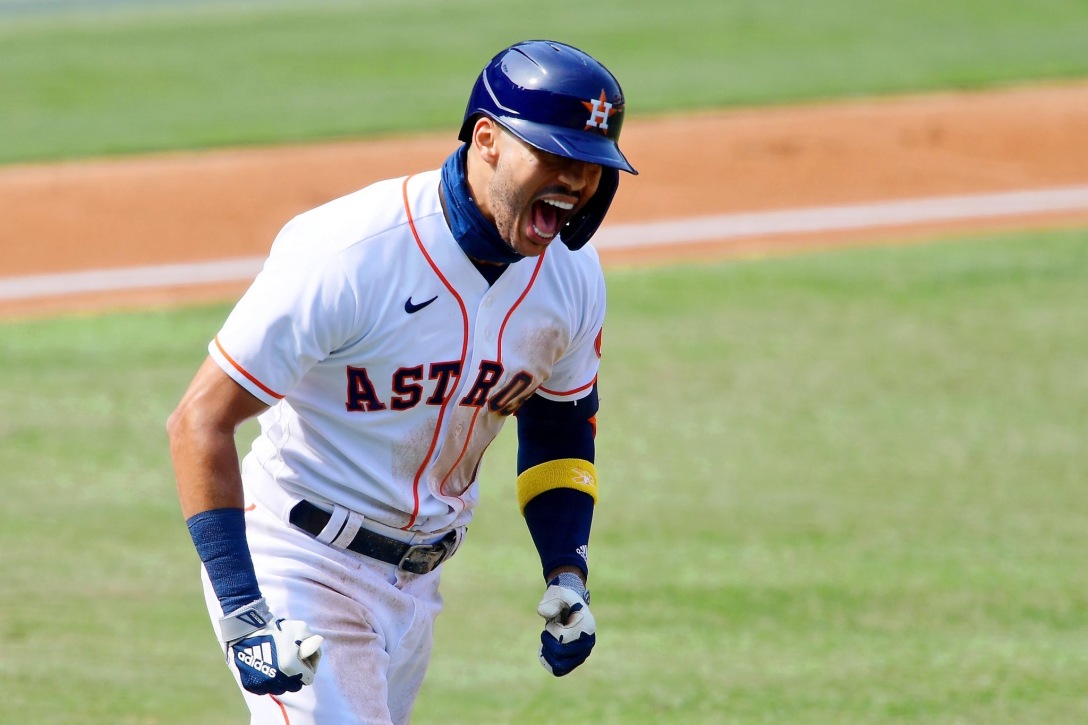 I started thinking about this project during the Omer, when I had such a positive experience writing about baseball every day over on Omertime. I wondered whether I could write regularly about baseball and Torah even after Shavuot. Then I moved to a new city at the end of May.

I didn’t pick it up again until this summer when the truncated 2020 MLB season was announced. But then I started a new job at the beginning of July.

So here am I now, finally beginning as the season winds to a close. As I write, the Astros are in the ALCS, down in the series 3-2, one game from elimination (for the third time). But the timing makes sense in the cycle of Torah, as we start reading this Shabbat from the beginning, the book of Genesis and parshat Bereshit. My goal for the next year, at least, is to write about my favorite sport and parshat hashavua.

How do we know that Gd is a baseball fan? Because the Torah starts, “In the big-inning.”

The parshah begins with the grandest and yet simplest of cosmologies: The iconic King James translation renders, “In the beginning, Gd created heaven and earth.” Rashi, however, complicates the seemingly straightforward verse with the very first word, from which the parshah gets its name, bereshit. The word is technically a smichut, a construct form of two nouns. Properly, the verse reads, “In the beginning of Gd’s creation of the heavens and the earth . . .” The account is not necessarily sequential, Rashi argues: Among other reasons, the water in verse 2 has no provenance! Thus, “you must [admit] that scripture does not teach us anything about the order of the earlier or later [acts of creation].”1

But the account of creation, with its repetitive language and clear rhythm (“there was evening, and there was morning, the nth day”) certainly intends to be understood as linear. Thus Avivah Zornberg writes: “There is a tension between the benevolent clarity and power of the narrative and and the acknowledgement of mystery that inheres in the very first word and that develops as the implications of the beginning are realized.”2

Ramban departs in some ways from Rashi in his interpretation of the creation account. He meticulously discusses each development from the smallest beginning moment; his analysis is a reminder that small acts transform — and indeed create — the world. As Nina Caputo argues, he also sees in the creation account “a real physical embodiment of history, of the divine plan. The crucial element in Nahmanides’ view of text and history was the steadfast belief that time itself has a purpose, namely to provide a qualitative and quantitative rhythm to the generations of human life.”3

Ramban notes that the verb bara, “[Gd] created,” appears in the creation account at the very beginning in Gen. 1:1 and then again at the close in Gen. 2:3, and in between many other verbs in the account denote Gd’s actions (a’sah, vayomer, vayikra, vayavdel, etc.). “According to Nahmanides, this indicated that the only true act of creation out of nothingness occurred at the first moment of time when God created the primordial matter of the heavens and the earth; the rest of creation was thus a process of shaping and making forms and matter . . .”4 In other words, there is a definitive beginning and ending, and the rest is details.

I am reminded of the definitive opening and closing of a game, and the rhythm of innings (“there was the top, and there was the bottom, the nth inning”). That order seems immutable, as do the 27 outs that a team has to get to secure a W. It’s all very systematized, full of details to be catalogued and analyzed for what they prove and presage.

It’s in baseball that Rashi and Ramban converge: Each small act is transformative, and stuff comes out of nowhere. It matters whether George Springer hits a lead-off home run in the first inning, and Golden Glover Jose Altuve can short-hop a routine two-out ground-ball — allowing a three-run home run, the difference in a later loss. Does Carlos Correa smash a walk-off HR because he had already gone 0-3, or despite going 0-3?

In the end, baseball is often magic. Says Bronistaw Malinowski: “We find magic wherever the elements of chance and accident, and the emotional play between hope and fear have a wide and extensive range. We do not find magic wherever the pursuit is certain, reliable, and well under the control of rational methods.”5 And maybe it’s that magic that baseball shares with creation.

According to the midrash, “Gd built worlds and destroyed them.”6 As much as the narrative in parshat Bereshit makes it seem like what Gd accomplishes is “certain, reliable, and . . . rational,” the rabbis imagine Gd in that moment as much at the mercy of chance as any us. Gd creates, Gd observes, Gd is dissatisfied, Gd tries again. One might say that Gd needs several ABs to knock it out of the park.